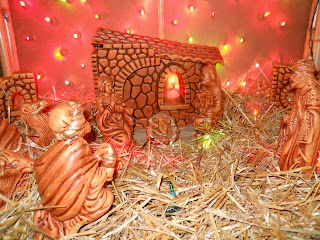 
When the doorbell rang, Mr. Reynolds went to answer. The young man on the front steps popped open a beer can he had pulled from his ragged, oversized coat. “Are you on the wagon?” he asked, and offered Mr. Reynolds the first slug.
“Lee,” Mrs. Reynolds called from behind her husband. “It’s freezing outside. The chowder? The children are hungry.”
“We’re sitting down for supper,” Mr. Reynolds said to the boy. “What, what’s your name?”
“Jeffrey. I’ve got some peanuts. Give them to your kids.” He set the beer down and fumbled at his coat. “That’s a nice manger scene in your yard. It’s like real.”

"Just Cold" (1000 words) has been accepted for a December, 2016 release by an online magazine with an improbable name.

The story of the real Jeffrey (as shown on a WLOS Television News story).