The Southward Migration Has Reached Us 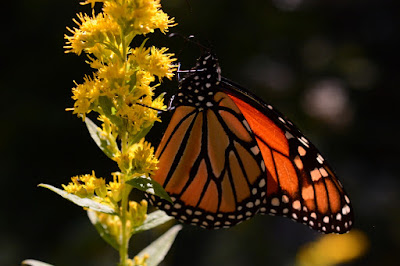 The early front of the southward monarch butterfly migration has now reached our area of the , which is more or less south of .  This past weekend, I stopped at various places listed in my guide and saw anywhere from 2 to a dozen monarchs feeding on goldenrod, aster, and one on Joe Pye Weed. On the previous weekend I stopped at the Mills River Gap Overlook and met some of the hawk watchers.  They said they expected a of in four days or so, and sure enough, just five days later, as reported at HawkCount.org for the station called , they counted 5,781 on Friday, September 20. I drove up on the following Saturday and saw large “kettles” and the birds streaming from it for the first time in my life.  It was spectacular.  You’ve missed main flow of Broad Wings for this year, but maybe you can catch it next year. 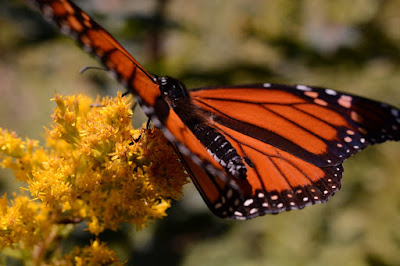 Another migratory creature I observed in large number for the first time was the dragonfly.  Nobody was counting them, but they easily showed in our binoculars.  I guess there were hundreds in the air at any one time, all zooming south over the ridge.  I need to do some reading on them.

I double-checked my book, and the peak day for the monarch migration over the southern last year was October 13th.  One observer told me personally she estimated as many as 3,600 butterflies per hour passing overhead at Haywood Gap, which is just parkway north of the Caney Fork Overlook.  I will do my best to witness that spectacle this year.  It has to be incredible. I hope to catch some video.
Haywood Gap features a Mountains to the Sea Trail crossing and a little parking area in gravel.  The best viewpoint for the monarchs is from the guard rail across from the parking area.  A long band of aster and goldenrod grows just there along the road. 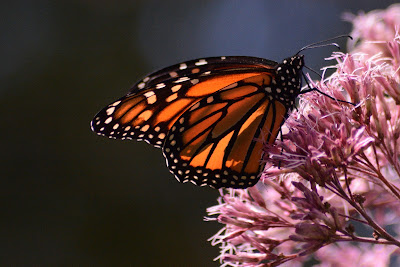 A bit of good news for viewing:  The National Park Service has cleared quite a few trees on both sides of the road just downhill from Cherry Gap Overlook.  They seemed to have done a good job of balancing both opening views and leaving many of the beautiful trees, the oaks and hemlocks.  I think this will make monarch viewing better.  It also will allow for the fall nectar plants to have more sunlight.

About the photographs:  I take a lot of photos of monarchs, so many it’s hard to sort through them and pick out the best.  The ones I select for publication are often either just the most beautiful or instructive I can produce, or else they show some different perspective or detail.  For instance, the first one is both backlit by sunshine and frontlit by my flash.  The second photo shows the male gland (near the end of the abdomen) to be a slit or narrow oval, rather than the usual black dot. I just like the color of the third one, which is from 2018.

My Milkweed Garden is a Love Nest

A few days ago I flushed this couple from a large Asclepias tuberosa (orange flowers and often called Butterfly Weed). He flew them up into a pine tree, she hanging beneath and still attached. Later on in the day and several times since, I've seen males patrolling our whole property, flying like mad everywhere and giving special attention to any bright color, especially the orange flags I have out to mark places related to construction and landscaping.
Posted by M.H............................ at 6:57 PM No comments: