Matt limped to the kitchen sink, filled a glass with water, and drank it down.

He slid the window curtains open, and a tiny speck streaking between the crusty, smeary dishes caught his eye. The speck was but one ant in an endless string of frenetic two-way activity. Ants met each other head-on, paused to visit, and rushed away. Matt reached out to squish the foragers, to rub them into a film of reeking, acrid fear when thumping sounds from the back steps diverted him.
The door opened.
“Julie!” he said. He gazed with trembling enthusiasm at the lumpy plastic bags hanging from each of her hands.
She plunked them onto the floor. “Incredible. Three decent cauliflower heads, 40 pounds of sprouted sweet potatoes strapped on my bicycle, a dozen mushy organic bell peppers, bagels, and hey, look at this.” She fished in a bag and held up a grey triangular block.
“Oh, my gosh,” Matt said. “Cheese!”
“Parmigiano Reggiano.”
Matt sniffed the block and smiled.
“It’s rock hard, but basically edible.”
“Yay. We are feasting this morning. You know I would have gone with you if I hadn’t been warned last week. Next time I might be arrested.”
“You mean if you hadn’t sprained your ankle and called an ambulance. When I was inside the dumpster at O’Tingles, a police cruiser glided around the corner, and I didn’t duck fast enough. He flashed his beam, rolled down his window, and said, ‘I’m aware you’re in there. Be careful.’ And then he left.”
“He left?”
“Right.”
“Nice.”
“Hey, clear a spot. I need to rinse the plunder.”
Matt shifted stacks of dishes while Julie glared at the insects crawling across the counter or dashing for cover. “Piss ants, again,” she said fervently. “Destroy them. I want you to, now. That’s your job.”
Breathing slowly through his mouth he watched the busy raiders. He could taste the garbage can odor still clinging to Julie’s clothing. Inside one bowl a hundred minuscule ants had circled the dried dal bhat remnants. He moaned to himself. “They’re harmless, really. It’s good sharing our space with these creatures.”
“So, you won’t kill them?”
“No, I won’t. They have a unique place in the cosmos.”
“And what’s that?”
“They, they clean up.”
“They clean up?” She sighed. “At least wash the stupid dishes, okay?”
“Fine, fine. You take a shower. Then I’ll give you a hug, and we’ll cook breakfast.” 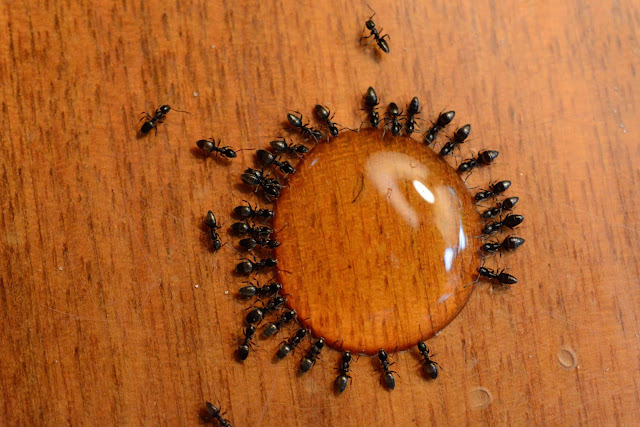