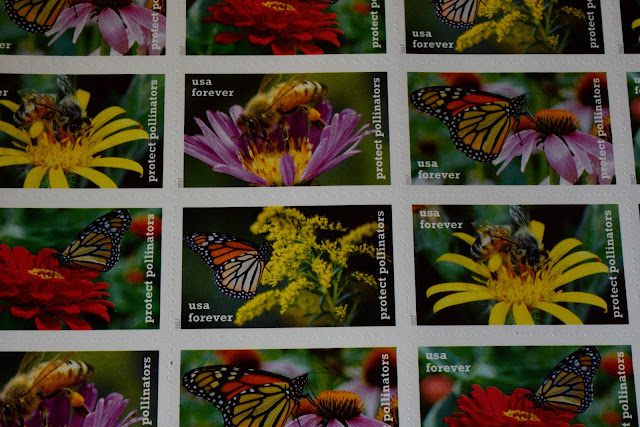 Monarch observers have reported on Journey North some huge numbers crossing the southernmost Blue Ridge Ridge Parkway yesterday, October 14, and the day before.  As many as 2000 or so an hour at Cherry Cove Gap and perhaps that many at Haywood Gap.  Edie and I stopped at the latter today and witnessed a short flurry of heavy traffic.  Though we didn't count, we saw dozens flying right over our heads in a few minutes.  This is the heaviest flow I have ever seen.  It's possible tomorrow will be quite heavy.  Haywood Gap is at Milepost 426.5. This is not an official overlook, but you can find a bit of parking on gravel and there is some space in the grass.  Sit on the guardrail along the south side of the road. 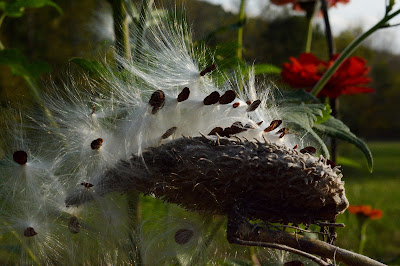 On Saturday, October 7, I gave an evening slide presentation and talk at the Julian Price Park amphitheater.  The beautiful park with a 47 acre lake is at milepost 297 of the Blue Ridge Parkway.  Elevation, something like 3400 feet.  The presentation was not particularly well attended, but it was worth the trip, nonetheless. Afterward I camped overnight, sleeping in my 4Runner, parked in the drive of an RV spot.  Oak trees kept dropping acorn bombs on my roof and that made it hard to stay asleep. They sounded like bombs, or rather gunshots. At about midnight, I moved the vehicle to the empty neighboring campsite where the acorns fell less frequently.

On the way to the event, I drove up the parkway from Asheville, stopping at likely gaps to see if monarchs used them to cross the ridges.  The absolutely best place was the Ridge Junction Overlook.  This overlook is about 100 yards north of the entrance to Mt. Mitchell State Park. It has a fantastic long view and I counted 20 monarchs in half an hour, most sailing over.  As the temperature warmed, other monarchs stopped to feed on the violet asters along the parking area.  Before I left, I did a spot count and got 15.  I will definitely be including this location in the 2018 edition of my guide.  Further north I counted six at the Bald Knob Parking Area, five on the private land adjacent to Gooch Gap, and two in the meadow at the turnoff to Linville Falls Visitor's center.  (I will add milepost numbers later.)

So, get up on the parkway and look for monarch butterflies.  The migration will not last much longer!

I plan to create a YouTube video of the slide presentation, which itself contains videos of monarch life cycle transitions. I learned quite a bit during the preparation of the presentation, in particular something of the natural and culture history of milkweed and the overwintering monarch population in California.  Mexico has 12 known sites, but CA has 400! 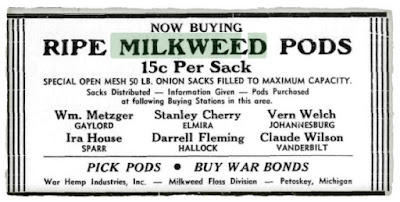 The NC Arboretum’s annual Monarch Day is over for this year.  I had been invited to set up a table to sell books and talk with people.  Along with me was a National Park Service interpretive ranger.  I brought a flower arrangement I made with zinnias, goldenrod, and a American beech branch from which I hung three chrysalises to show.  I also brought a couple hundred almandine garnets I had collected locally to give away to children. (The garnets happened to be more popular than my book!)  The arboretum sold milkweed plants, some having live monarch larvae on them.  I thought that was great.  I didn’t mention it in the book, but the arboretum has had an ongoing live butterfly display for several months.  It’s called Winged Wonders and lasts through October 29.  Next year the Monarch Day is set for Saturday, September 8, but as the date nears, check the arboretum’s website to be sure it is still on, because there is some discussion about only holding the event every other year in the future.

The Cradle of Forestry’s monarch event also is past.  Next year check their schedule for the time and date.  I went this year and learned a lot from the speaker.

Observers reporting for Journey North’s Monarch Peak Migration Map say they’ve seen monarchs this fall at the following locations not given in my book. I’ll be including these southernmost Blue Ridge Parkway places in the 2018 edition.  To locate specific overlooks, zoom in and click the splash symbols on the BRP Road Closure Map.

The entrance road to Mt. Mitchell

Below is the report I filed at Journey North.  See all the Peak Migration Map reports and the accompanying photographs at: www.learner.org/jnorth/monarchs
Date: 10/1/2017
Number Sighted: 95
Comments: On Saturday, August 30, we drove between the Mills Gap Overlook and the Caney Fork Overlook on the Blue Ridge Parkway and didn’t see but two monarchs in five hours. On Sunday the following day we counted 95 in the two hours between 1:00 pm and 3:00 pm at the Cherry Cove View, milepost 415.7. Most didn’t stop to feed. Plenty more came over afterwards in that location until it got colder at about 6:00 pm. I drove up and down on the parkway, but didn’t see any monarchs at any other places and times. The weather was mostly clear to partly cloudy. A light breeze drifted from the north. The temperature midday was about 70 degrees F. Cherry Gap is where the National Park Service placed a monarch migration informational plaque. A dozen or more monarch watchers gathered there throughout the afternoon, including Jennifer who had lost a newborn son 20 years ago to the day. She had come to release a butterfly helium balloon at sunset in his memory, and she found support and fellowship in the company of other monarch lovers who she had just met. That morning a female monarch had eclosed at my home and I gave it to her to release.
Mickey Hunt

A Monarch Butterfly Memorial on the Parkway 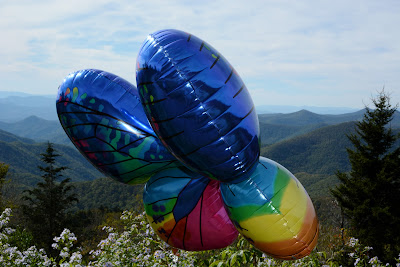 Edie and I drove south up the on Saturday.  We gave a few of my monarch books to people who gave clues they might be interested.  Some books to the hawk watchers at Mills Gap Overlook.  One to a man riding a Harley motorcycle.  Another to a woman taking pictures of butterflies at Caney Fork Overlook.  The man had been an Interpretive Ranger for the National Park Service up north and on the BRP.  He now drives a tour bus and is a professional photographer.  He showed us a photo of a lovely, huge timber rattler he had seen the day before at the Caney Fork Overlook. The woman had been an environmental lawyer for years and now she’s working on a book on black bears in the Smoky Mountain NP.  She also does photography professionally and offered me a little critique on my photos.  We had long talks with both of them and I hope to stay in touch.   We only saw two monarchs all day.

On Sunday, yesterday, I drove up by myself and spent most of the afternoon at Cherry Gap Overlook.  (There weren't any monarchs at Pounding Mill and John's Rock overlooks.) Again, I gave out books.  After I arrived I noticed a woman in green who seemed to be taking pictures of a monarch I had seen feeding on aster.  It was the only monarch around at the time.  Since I had arrived, three others had flown over, not stopping.  I stood beside her and made some comment.  Yes, she had come up to see the butterflies.  And when I gave her my book she was more or less flabbergasted because she had been intending to buy it at the Botanical Gardens on her way, but she had run out of time. As we talked, two other women came up, Jennifer and Renee.  They said they had been eavesdropping.  Of course we were happy for them to join us and I gave each of them books, too.

Jennifer, then told her story, which I will recount as best I can.  (She said she’d write it and send it to me, but for now I’ll go off memory.)  Twenty years ago that very day, her baby, Blake, had been born, but not alive.  Stillborn at full term.  For his memorial service, Jennifer had released some monarchs, and now every year on the anniversary she honored, mourned, and celebrated her son by coming up to the parkway and releasing a butterfly balloon.   When I heard this, I said, “I brought a monarch butterfly with me that emerged just this morning and I’ll let you release her, if you like.”

I had used this monarch as a chrysalis at our table at the NC Arboretum’s Monarch Day.  I tied thread around the cremaster stem, plucked the silk pad off of the wire frame it had been attached to, and hung it and two others on a lovely flower arrangement of zinnia, aster, goldenrod and beech I had made.  When the butterfly emerged yesterday morning, I just carried it, still hanging on its chrysalis shell, to the car and hung it from my rear view mirror.

Well, Jennifer took pictures of the butterfly hanging there, and later as it rested on the car seat after it had decided to try to fly a little.  Jennifer carefully coaxed the butterfly onto her finger and then walked it to some aster blooms where she coaxed it onto them.  Later on, when she was ready, the butterfly flew away, on to , we hope.

I was certainly moved by hearing Jennifer’s story and by the opportunity to be a part of her memorial day.   The other woman, Renee, did not know Jennifer before yesterday either, but as I was talking with someone else, I heard them praying together.  I told Jennifer that one of my life themes was “The heavens declare the glory of God” from Psalm 19, which goes on to say, “the skies proclaim the work of his hands. Day after day they pour forth speech; night after night they display knowledge.”  Renee said she also had lost a child.

Perhaps another dozen or more other people came up for monarchs through the rest of the day.  I spoke with many of them.  We formed a little Cherry Gap counting team and between 1:00 and 3:00 pm we counted 95.  It was a steady flow of flyovers, none stopping to feed.  I’m sure we missed some because we were so busy talking.  I’d like to round the number up to 100, but that wasn’t what happened, even if five flew over in a group just after I stopped my count.

At about 3:30 I drove out to Caney Fork Overlook and didn’t see any monarchs there at all, even though it was warm and calm and a lot of asters were in bloom.  Jennifer was there and that’s when I took pictures of her balloon.

On the way home I stopped at Cherry Cove Gap again and the butterfly traffic was still strong.  A couple I knew from church had come up with another couple just to see the butterflies.  I showed them my book, and it was funny that they weren’t very interested.  I had given them a three minute talk on life cycle and I guess that satisfied their curiosity.  Perhaps when people know you, they take things for granted.  I didn’t give them a copy partly because I was running low.

All in all, it was a satisfactory day.  I listened to Bach solo violin partitas on the way home and the drive went fast, even if I got sleepy at the end.  Not only am I continuously amazed about the monarch migration, yesterday I was amazed at the human migration of people who journey every year to see the monarchs.
Posted by M.H............................ at 7:07 AM 1 comment: